Rage of the Behemoth edited by Jason M. Waltz 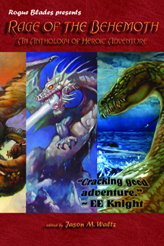 Oops, you forgot something.

The words you entered did not match the given text. Please try again.

Reply Bruce Durham
12:38 AM on May 18, 2010
Thank you for the wonderful review and the extremely kind words for 'Yaggoth-Voor'. It was a pleasure sharing a ToC with such a collection of gifted writers.

Start a Free Blog at Webs.com